A Drink with Eric Himel 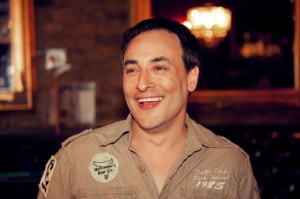 Studying at Parson’s School of Design led you to where you are today, a notable stylist here in Chicago. What was it like studying under Tim Gunn?

It was amazing. When he first was on “Project Runway” I definitely wasn’t surprised that he was one of the ones that made it. One of the reasons I didn’t stay in fashion and design in New York was because everyone was very jaded and bitter and he just wasn’t ever like that. He’s exactly like you see him on TV … He always stayed true to himself. I think it’s really hard giving critiques and he was always really, really diplomatic about it.

You appear regularly on ABC’s Windy City Live as a fashion expert. What was it like styling Ryan Chiaverini?

One hundred and eighty degrees! When I first met him, he was in the big shoulder suits that sports people wear and his shirts were very “Jersey Shore”. [Laughs] When I got him in clothes that fit him and things that were a little younger, he got it and that is what I’m talking about. That is what I love, when people have a moment.

What local events have been memorable for you fashion-wise?

The Tinsley Mortimer party. She wrote a book and there was a party and it was funny because all of the girls that showed up you could tell they were like, ‘What’s my best New York, bitch, Gossip Girl, Tinsley Mortimer outfit.’ And it’s just funny.